This is historical material, "frozen in time." The web site is no longer updated and links to external web sites and some internal pages will not work.

You may have watched President Bill Clinton's 1997 Inauguration on television or heard about it from a radio broadcast. Maybe your local newspaper carried photographs of the event, or perhaps you visited an Internet web site to get information about the ceremony and various Inaugural celebrations. We rely on technology to help us participate in and learn about our government in ways that previous generations of Americans never dreamed.

For example, only the members of Congress gathered in Federal Hall on April 30, 1789, heard President Washington's first Inaugural Address. Twenty years later, after James Madison's swearing-in, his speech was published in the newspaper for all to read. James Polk took the oath of office in 1845 while Samuel Morse, inventor of the electric telegraph, sat near him on the platform tapping out the news on his miraculous machine.

It was 1857 -- the year James Buchanan became President -- when the Inauguration ceremony was first photographed. Citizens across the country were able to share in the festivities through pictures. Four decades later, movie cameras recorded highlights of William McKinley's Inauguration, giving viewers a new window into history. The year 1925 found Americans gathered around their radios to hear Calvin Coolidge take the oath of office, and in 1949, Harry Truman became the first President whose swearing-in was televised. If you like to use computers, you may know that President Bill Clinton's second Inauguration was the first to have an official web site and to be seen live on the Internet by people around the world.

The Constitution is the supreme law of the United States, describing our country's three-branched, democratic system of government and the fundamental rights to which all citizens are entitled. In Article II, Section 1, of the Constitution, our nation's founders declared that "The executive Power shall be vested in a President of the United States of America," and provided an oath of office for the President-elect's official swearing-in. This 35-word oath has remained unchanged for more than two centuries, in part because it so clearly and simply describes the responsibilities of the Chief Executive: 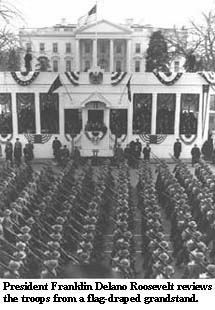 In 1817, James Monroe, our fifth President, became the first to give an Inaugural Address to an assembled public crowd. Since that time, the traditional Inaugural Address has been an opportunity for the President to speak directly to the American people. George Washington said just 135 words after his second Inauguration in 1793, while William Henry Harrison gave the longest Inaugural Address ever, taking almost two hours to deliver 8,445 words.

Inaugural Addresses are often remembered as reflecting a particular time in history. During the Civil War, Abraham Lincoln called on Americans to "...finish the work we are in, to bind up the nation's wounds," while in 1933 Franklin Roosevelt reached out to citizens discouraged by the Great Depression, saying, "This great nation will endure as it has endured, will revive and will prosper." President John F. Kennedy inspired a generation of young people in 1961 when he urged, "...ask not what your country can do for you -- ask what you can do for your country." And in 1993, President Bill Clinton reassured a nation in transition after the end of the Cold War by stating, "There is nothing wrong with America that cannot be cured by what is right with America." 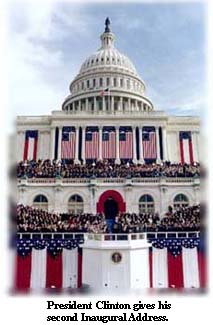 The swearing-in of President Bill Clinton on January 20, 1997, marked the last Presidential Inauguration of the 20th century. Thousands of people gathered in Washington, D.C., and millions more across the country and all over the world joined the ceremony by radio, television, and computer. The Inaugural celebration combined tradition with innovation, bringing together citizens from all walks of life not only to honor the President and Vice President, but also to celebrate the larger American family and the enduring promise of our great nation.

The public festivities included a rehearsal for the Presidential Gala that was held the following night -- an evening of music and community spirit where some three million pounds of canned goods were donated by concertgoers to benefit local food banks. On Saturday and Sunday, despite freezing temperatures, crowds gathered on the Mall to enjoy regional food and music, interactive technology displays, and discussions with noted American thinkers. Meanwhile, Inaugural planners checked their lists and made sure everything was in place for Monday's historic events.

President Bill Clinton's schedule on Inauguration Day began with a morning prayer service at the Metropolitan A.M.E. Church near the White House. By the time he reached the west front of the Capitol for his swearing-in, thousands of people had gathered on the Mall to share in the special moment. After the Reverend Billy Graham gave the invocation and those assembled had said the Pledge of Allegiance, Associate Supreme Court Justice Ruth Bader Ginsburg administered the oath of office to Vice President Al Gore. Then, famed soprano Jessye Norman sang a medley of patriotic songs and spirituals, preparing the audience for the central rite of the day. 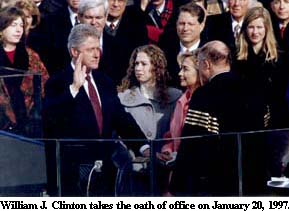 Surrounded by members of Congress, Justices of the Supreme Court, dignitaries, family, and friends, the President stood next to his daughter, Chelsea, and rested his left hand on a family Bible held by Mrs. Clinton. He repeated the oath of office administered by Chief Justice William Rehnquist, ending with the traditional words, "So help me God." Afterwards, the National Anthem was sung, and Arkansas poet Miller Williams read a poem, specially written for the Inauguration, called "Of History and Hope."

Inauguration Day, 1997, coincided with the national holiday commemorating the birthday of Dr. Martin Luther King, Jr. President Bill Clinton's second Inaugural Address paid tribute to Dr. King's legacy by calling on Americans of all races, cultures, religions, and backgrounds to heal divisions and to become one community to face the challenges ahead. He asked his listeners to remember the goals of our nation's founders, strengthening the American Dream of opportunity for all. After the ceremony's final blessing, the President and other guests gathered in the Capitol's Statuary Hall to eat a meal based on recipes from Thomas Jefferson's era. The President also issued a special Inaugural Proclamation declaring a "National Day of Hope and Renewal."

The First Family later participated in the Inaugural Parade, first by car, and then by walking the last few blocks to the White House, where they watched the colorful procession of military formations, floats, and performers from across the country. That evening, President and Mrs. Clinton visited each of the 14 official Inaugural Balls taking place around Washington, D.C. They enjoyed visiting with friends, greeting well-wishers, and taking part in a truly national celebration of our unique and wonderful democracy.

The First Inauguration | Inaugural Traditions
Inside the White House -- Spring 1997