This is historical material, "frozen in time." The web site is no longer updated and links to external web sites and some internal pages will not work.

The Presidential Inauguration in History

It was in New York City, our nation's first capital, that George Washington became the first President of the United States. Congress had planned for the new government to begin its responsibilities on March 4, 1789, but a harsh winter made travel difficult, and it wasn't until April 6 that enough congressmen arrived in New York to count the electors' votes and announce, "Whereby it appears that George Washington, Esq. was unanimously elected President, --and John Adams, Esq. was duly elected Vice President of the United States of America...." 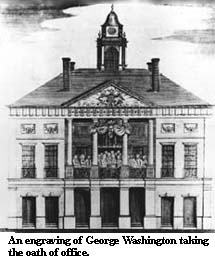 It took several days for the exciting news to reach Mount Vernon, General Washington's home in Virginia. He set off for the capital, leaving behind his wife, Martha, who would join him later. He traveled by coach and on horseback through Baltimore, Wilmington, and Philadelphia, finally arriving in New York City aboard a grand barge that had been rowed from New Jersey across Newark Bay. Meanwhile John Adams, his Vice President-elect, and the Congress were deciding what the new Chief Executive's official title should be. Adams preferred "His Most Benign Highness," but a congressional committee settled on the title we still use today: "President of the United States."

Inauguration Day, April 30, began with the sounds of ceremonial artillery and church bells ringing across the city. At noon, General Washington made his way through large crowds to Federal Hall, where both houses of Congress were assembled for the swearing-in. New York Chancellor Robert Livingston read the oath, and Washington, his right hand on a Bible, repeated the words inscribed in the Constitution: "I do solemnly swear that I will faithfully execute the office of President of the United States and will, to the best of my ability, preserve, protect, and defend the Constitution of the United States." President Washington added the words, "So help me God," a custom followed by every President since.

The first Inauguration gave rise to many traditions that continue today. For example, President Washington followed his swearing-in with an Inaugural Address, a special speech written for the occasion. In 1793, the oath of office for Washington's second term was administered by William Cushing, an Associate Justice of the Supreme Court and the first in a long line of Supreme Court Justices to preside over Presidential Inaugurations.

Thomas Jefferson was the first to be sworn in as President in Washington, D. C., the location chosen for the permanent capital and the site of all but a handful of Inaugural ceremonies. Jefferson showed his taste for simplicity by going on foot to the Capitol for the oath-taking and returning to his boardinghouse afterwards for dinner. After his second Inauguration, however, Jefferson rode on horseback from the Capitol to the President's House (the name then used for the White House) amid music and a spontaneous gathering of mechanics from the nearby Navy Yard -- a procession that grew into today's Inaugural Parade.

Jefferson's second Inauguration also began the tradition of the Inaugural Open House, when the executive mansion was opened to all who wished to greet the President after his swearing-in. The popularity of the Open House would later cause our seventh President, Andrew Jackson, to flee through a window after a mob of well-wishers stormed the White House, ruining furniture and breaking china in their eagerness to see him. In 1865, despite growing concern about safety, Abraham Lincoln shook some 6,000 hands after his second Inauguration. President Grover Cleveland, realizing that the White House could no longer accommodate such crowds, instead held a review of the troops from a flag-draped grandstand just outside, adding another element to the Inaugural Parade.

Presidents have celebrated in many ways since George Washington danced the minuet after his Inauguration in 1789. James Madison, America's fourth President, and his wife, Dolley, were the guests of honor at the first official Inaugural Ball, held at Long's Hotel in Washington, D.C. Martin Van Buren's Inauguration featured two balls, and President William Henry Harrison held three to meet the ever-growing demand for tickets. Later Inaugurations have featured specially built pavilions for dancing, balls held at several sites throughout the capital, and even Inaugural parties in other cities. Modern Inaugural festivities reflect not only the President they honor, but also the desire to include the many Americans who want to take part in celebrating our nation's rich history and the transfer of presidential power.