This is historical material, "frozen in time." The web site is no longer updated and links to external web sites and some internal pages will not work.
Biography of Mara E. Rudman
Deputy Assistant to the President for National Security Affairs
and Chief of Staff for the National Security Council 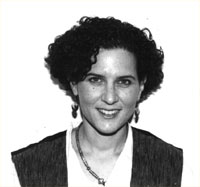 Mara Rudman served as Counselor to the National Security Advisor from May to August 1999. She served previously on the NSC staff as Special Assistant to the President and Senior Director for Legislative Affairs from November 1997 to January 1999. Ms. Rudman was minority Chief Counsel to the House Committee on International Relations from 1995-1997, as well as from February to May 1999. From 1993 to 1995, Ms. Rudman served as the majority Legal Counsel to that committee. Prior to her committee positions, she was an associate at Hogan and Hartson, and a judicial law clerk to the Honorable Stanley Marcus, Southern District of Florida. Earlier, Ms. Rudman worked as a legislative assistant to the Honorable Gerry E. Studds.

Born in San Antonio, Texas and raised in Hyannis, Massachusetts, Ms. Rudman received her A.B. from Dartmouth College and her J.D. from Harvard Law School.